This morning was awesome!! Despite getting to bed a bit late working on rewriting the post, this morning i was up early at 5am to head to the Temple of the Heaven Park. It is about 4km away from the hotel, and it was a bit tough finding a cab to get there at first. The cab ride was fast and cost about $2.

Upon arriving at the Park, i was once again the only westerner and tourist. It was an awesome scene, a ton of seniors filing into the park. I felt a little stupid as i followed the masses in, only to be stopped just short of the threshold to go buy a ticket 🙂 i neglected to note that everyone was swiping some type of card, subway style to get into the park. You had two options, park only or park + temple. The guidebook didn’t say too much about the temple option but i splurged and spent another $3 to get temple access, and thus far that has been the best investment of the trip. I strolled in with my Chinese centurions, and went off to explore. 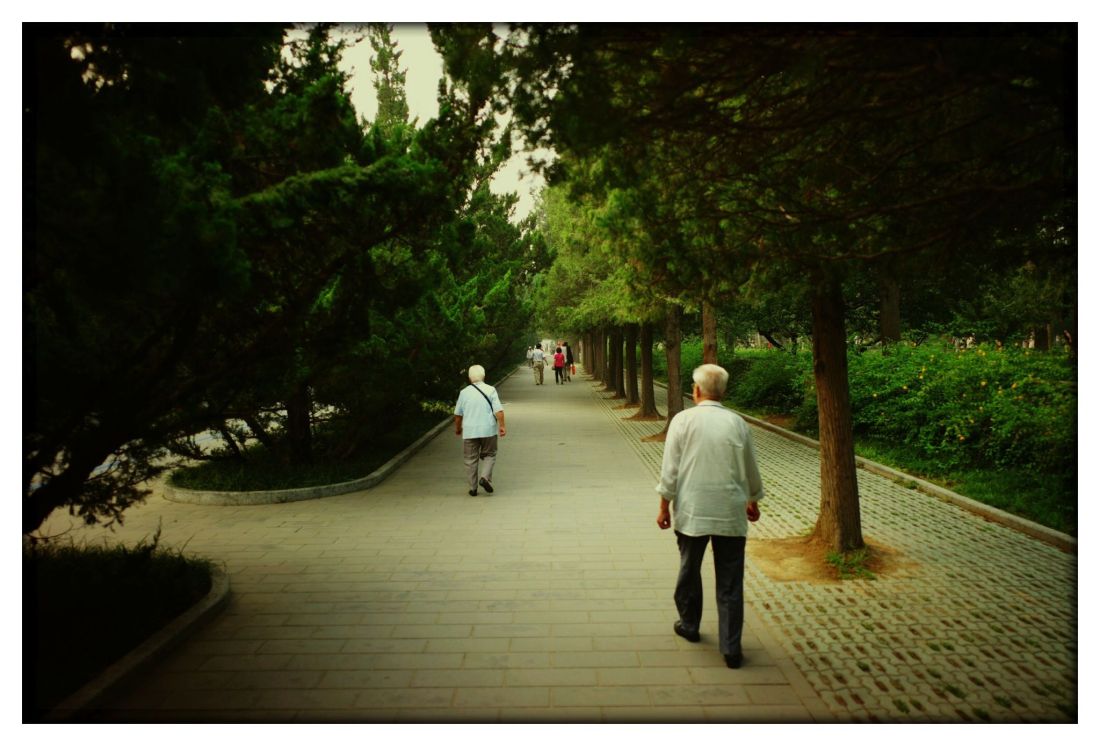 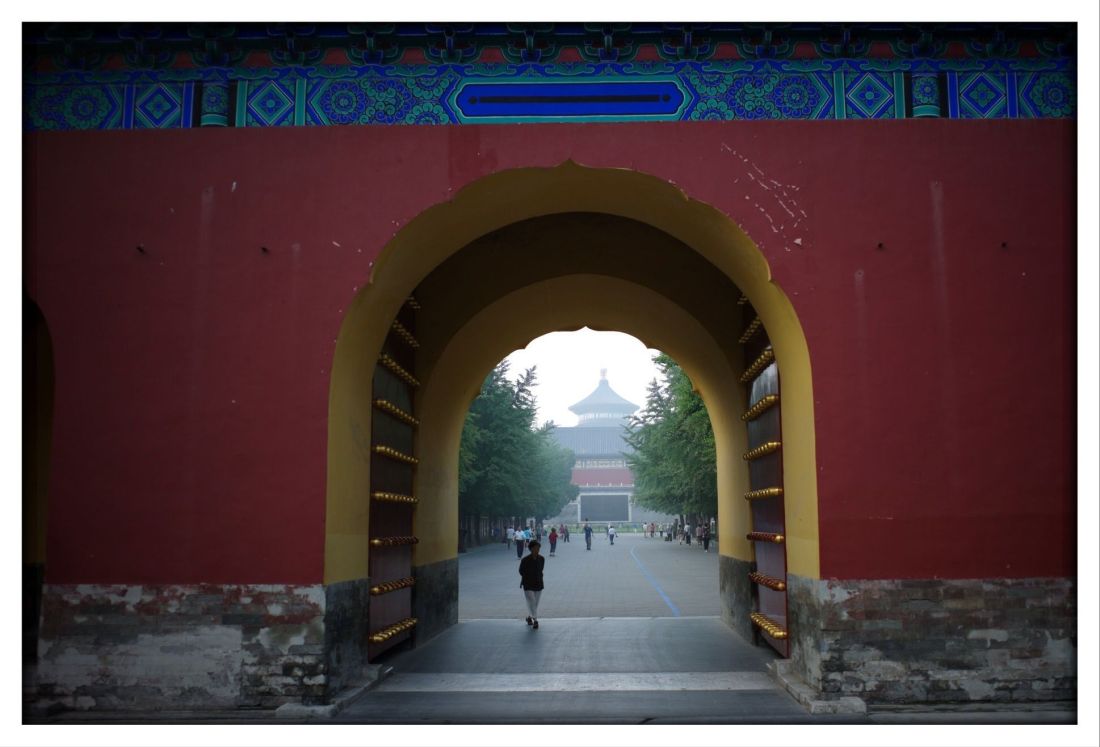 This park was a treasure chest of fun activity and sound. Before i was a 100m in the park, i found some seniors playing hackie sack, and playing toss with rings. One of the gentlemen was solo and spotted me and before i could turn away a ring was flying my direction. I caught it (an amazing catch i might add), and threw it back. But before i could get away the rings just kept coming. So i spent a half hour with my friend tossing rings. He had an arm on him. I regret not taking his photo, but I liked that experience to just be that, an experience. From there i went off to explore.

I could hear a chanting and drill like procession. A unison of voices defiantly singing as if they were marching. I had to find them.

Following the chants, I found this a vine covered gazebo, which was giving a well deserved bit of shade to it’s patrons. 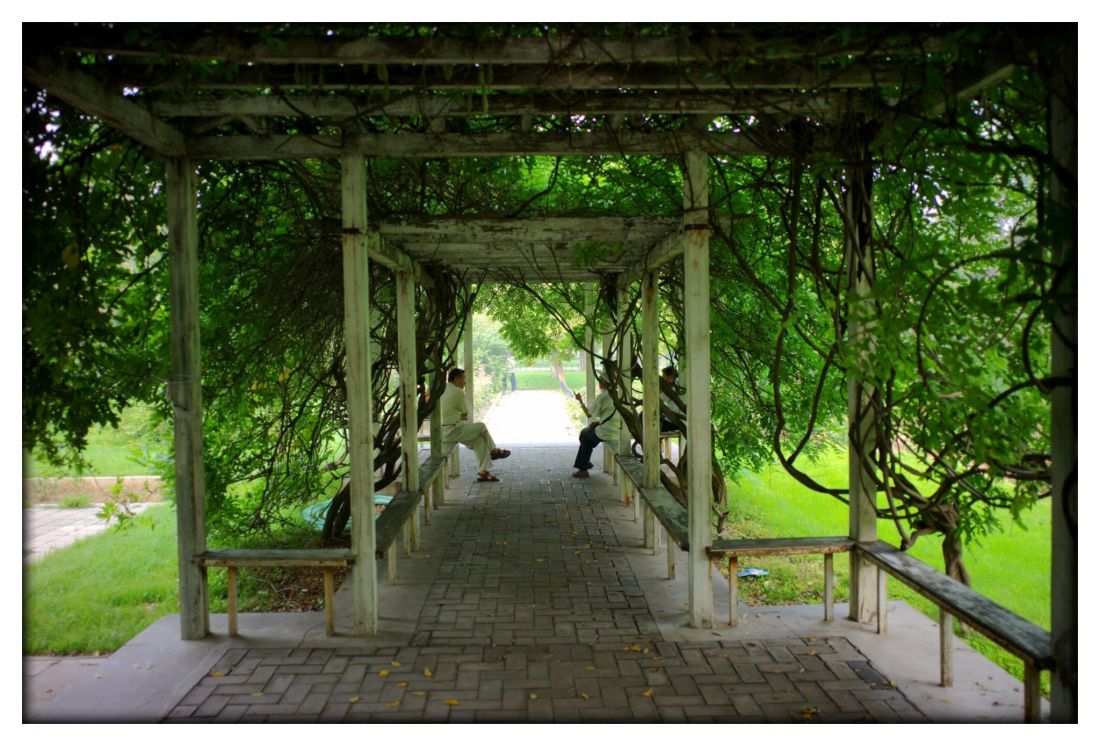 The path took me to a couple of pairs of women playing rings. 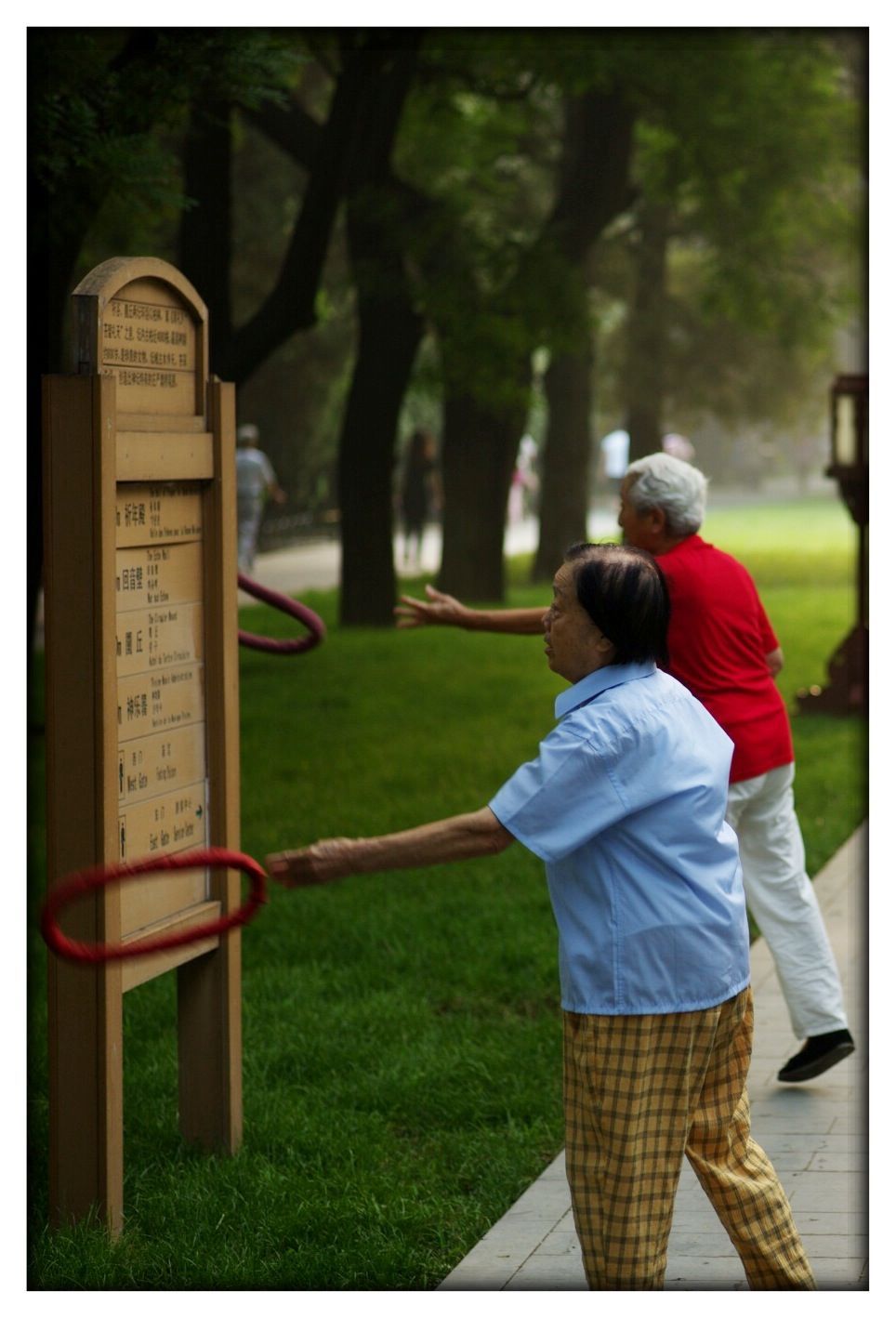 I just followed my ears and eventually found a mass of people in a group work out/ Tai Chi class. It was amazing. Fascinating to watch hundreds of people standing about the park working out together. Hey maybe this communism and forced retirement thing is pretty sweet? It was awesome to observe the camaraderie as well. It was clear that this happened daily, as groups greeted one another, had meeting points, and practiced together.

When i walked up to the scene below it was powerful. Everyone was in a trance. All joined in the procession. I sort of wanted to put down the camera and join in. 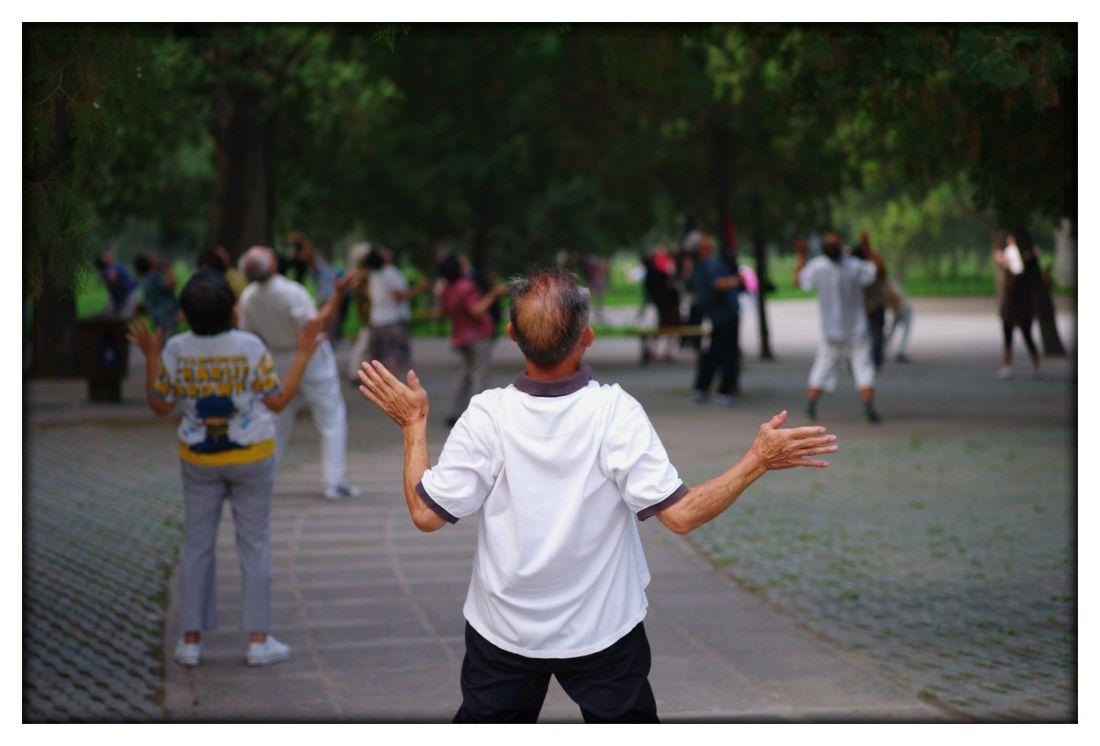 Post the Tai Chi crew, it was time to head back toward the temple which would be opening soon. Before I got to the main gate, i found a young man 🙂 practicing calligraphy on the pavement with water. I was really regretting not studying my Kanji better when i took Japanese because that would have come in handy. He was super chill and didn’t mind his picture taken at all. I wasn’t the only admirer, other chinese men and women would stop and talk to him about his work and just watch. 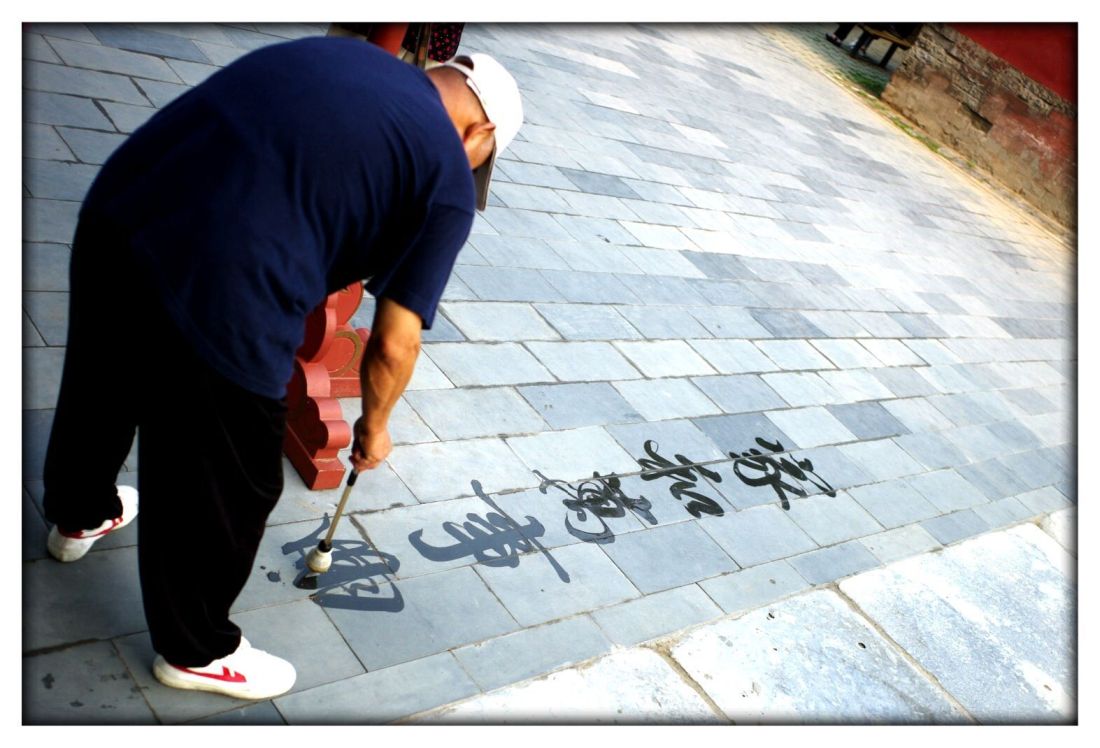 Ok it was now 8:15am and the gates were open. I really didn’t know what to expect. The forbidden city had been great, but sort of a lot of the same thing over and over. So with low expectactions i headed to the entrance but before i could get there, I was a celebrity again. Fudge, the cameras were back. I initially got annoyed being asked to take a photo, but i remembered my humility and jumped in. Of course i have now concluded that i will always turn the camera to take their photo as well. Its only fair right? I could tell the puzzled look on their face when I motioned for me to take a picture of them. I wonder would they get my bigger message? 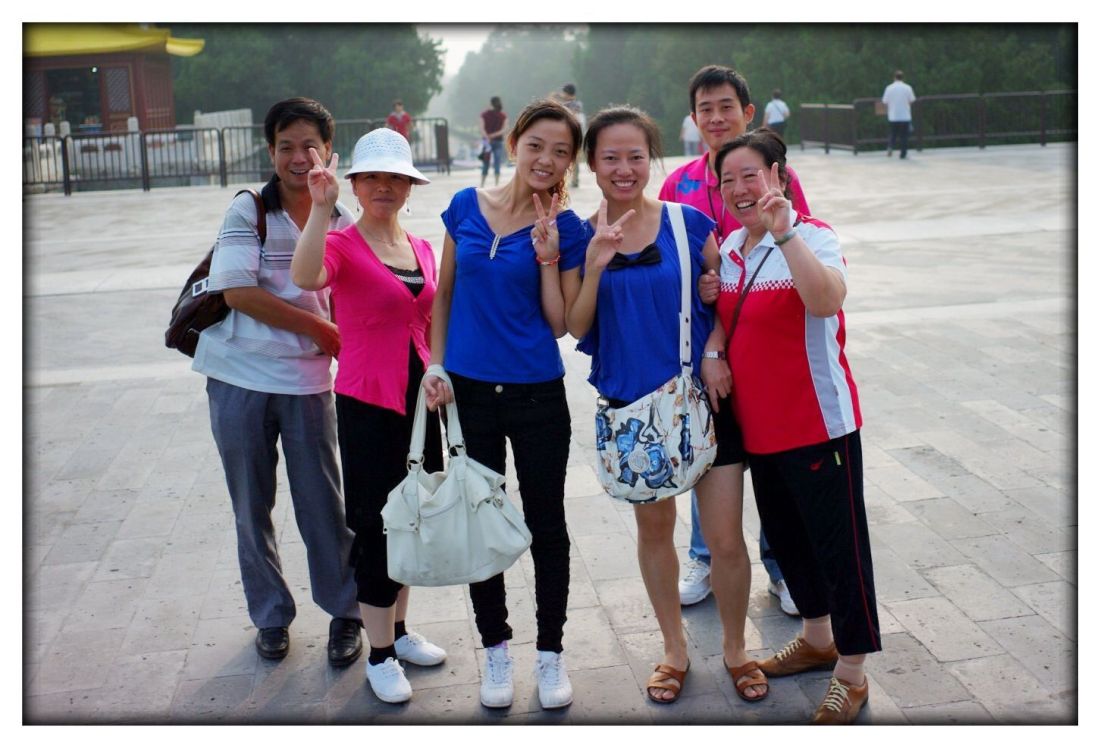 With that out of the way I sprinted to the gate, and as i approached it was amazing! Finally something for the goose bumps. 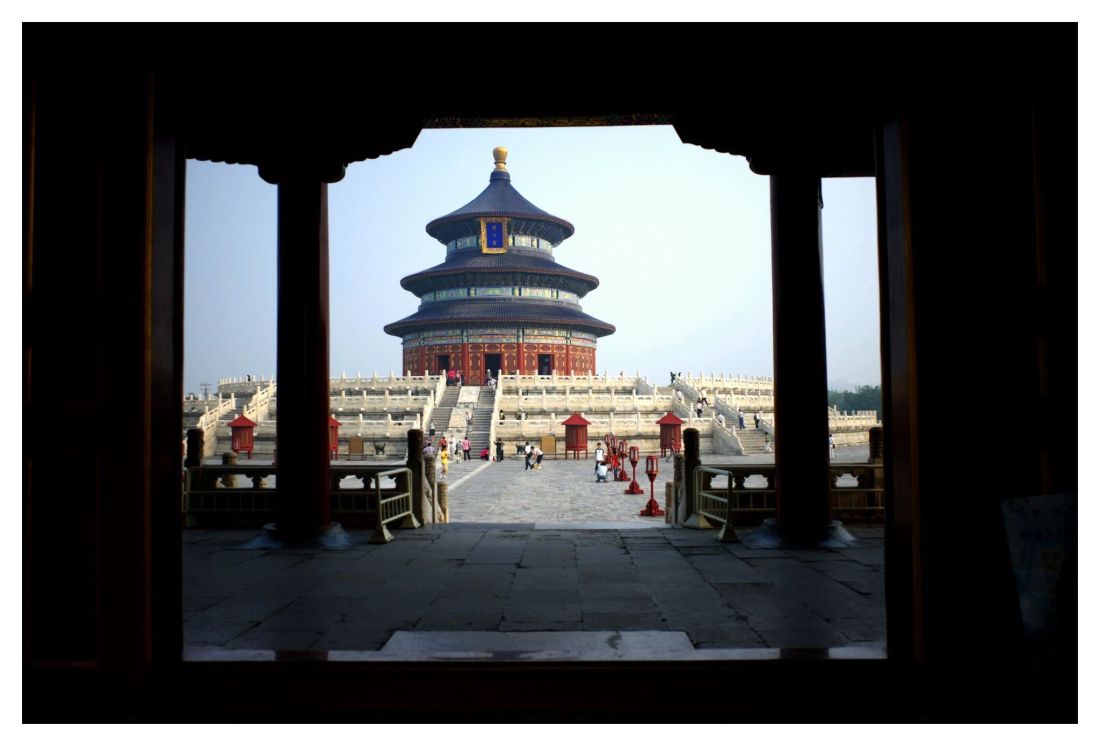 I was immediately struck by two things. One the beauty of the place and the building, and two the lack of crowds. I either beat the rush or people just don’t give this place the love it deserves.

Lots of love for the temple 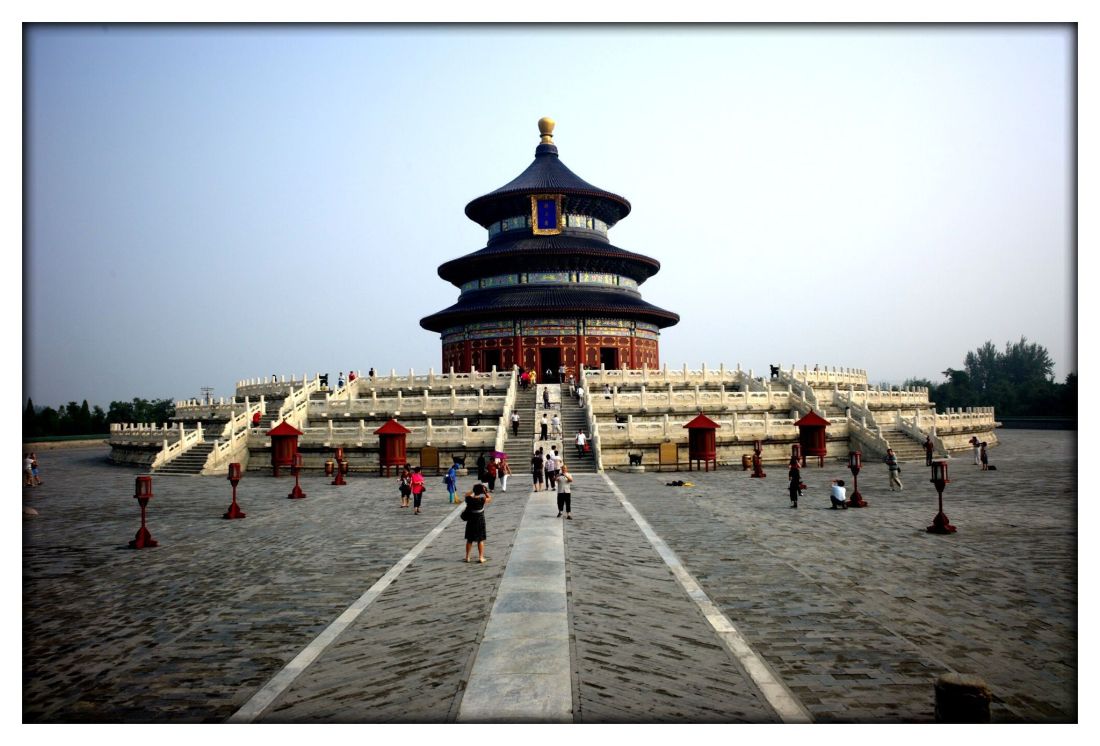 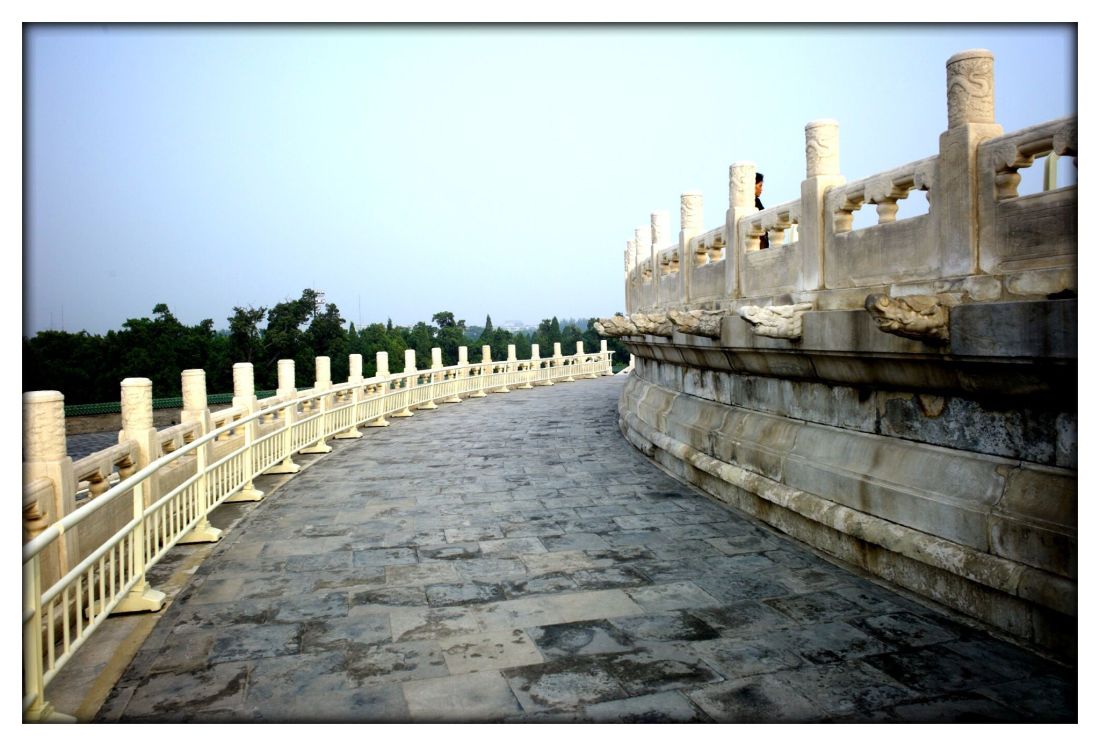 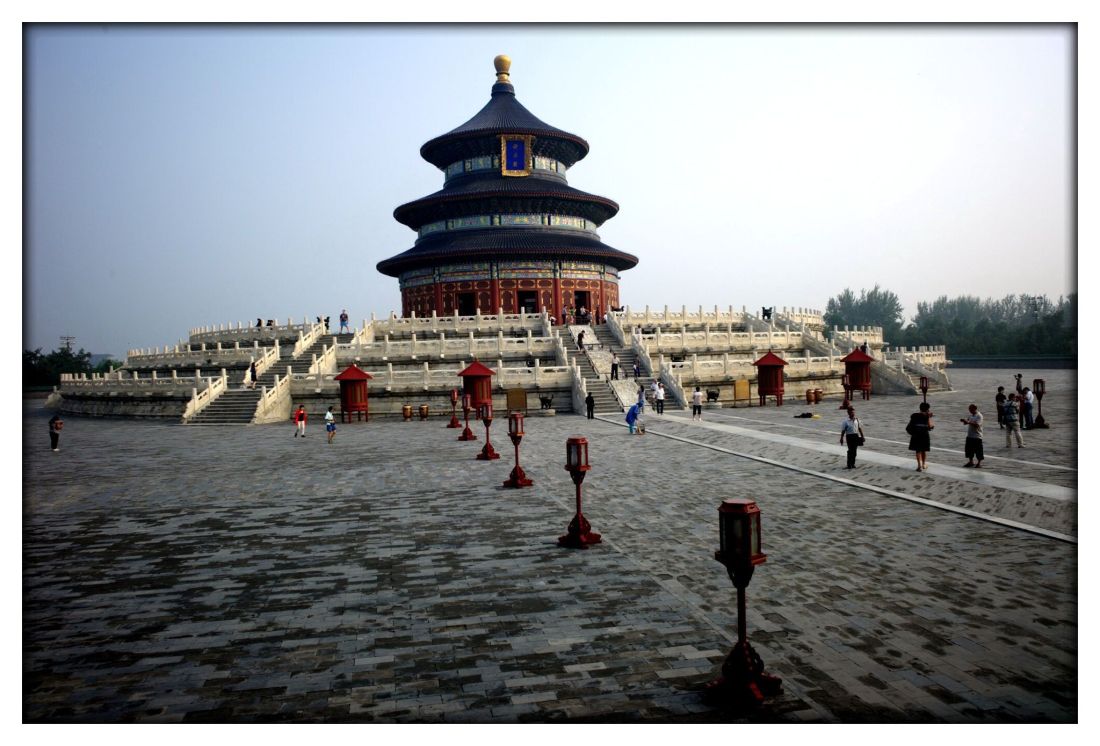 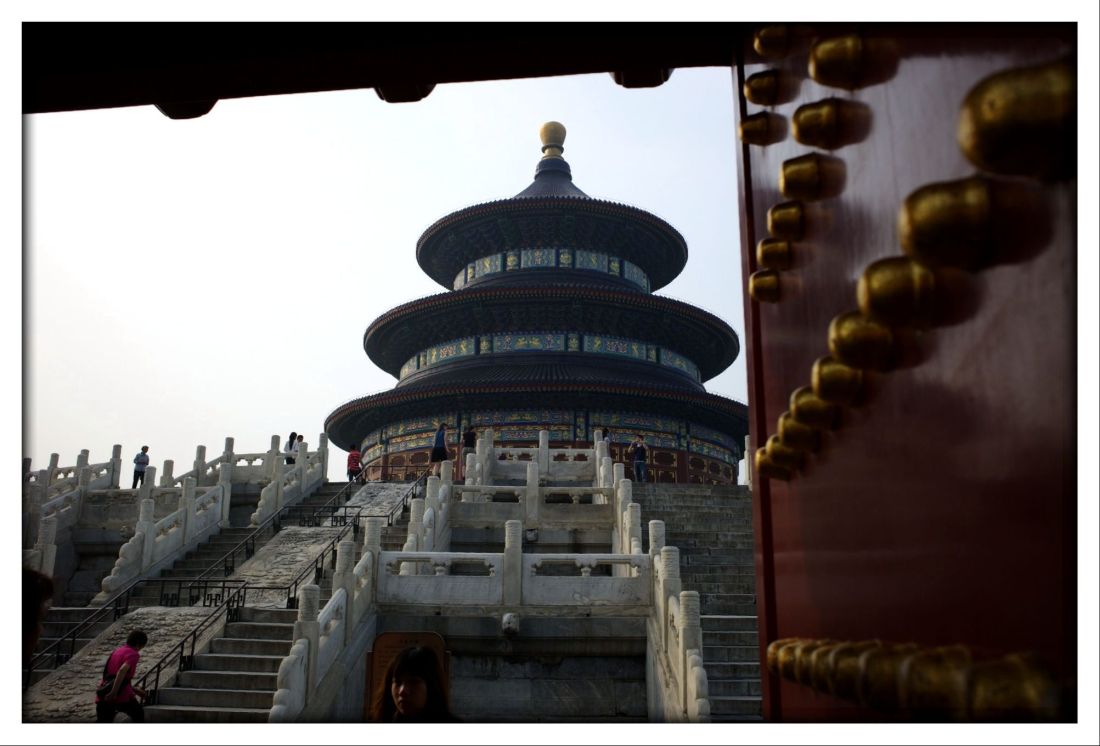 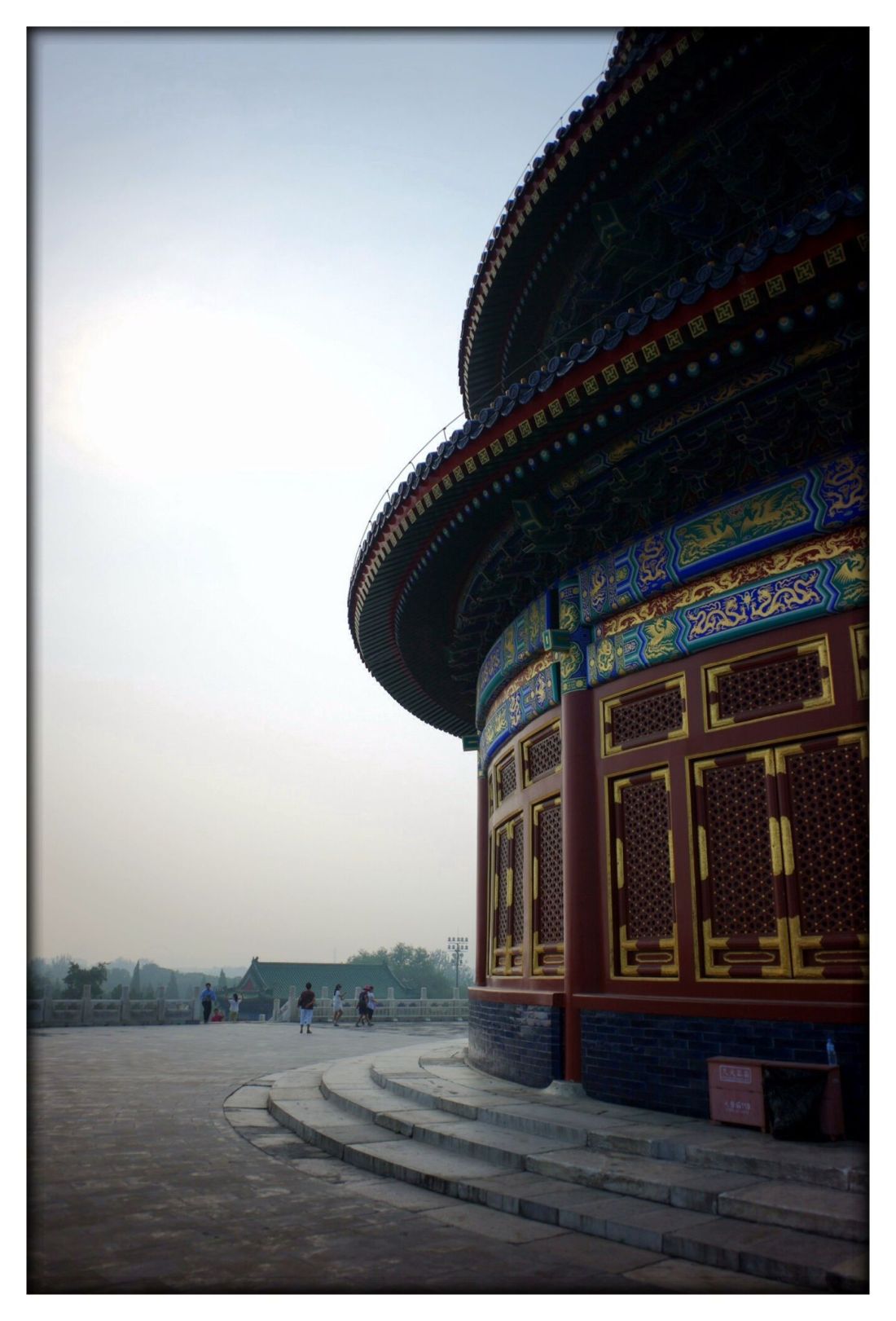 One of the fun scenes was the guy below, who was cranking away on his cell phone the entire time we were there. I especially liked the broom in the corner. Reminded me of a witch’s broom. 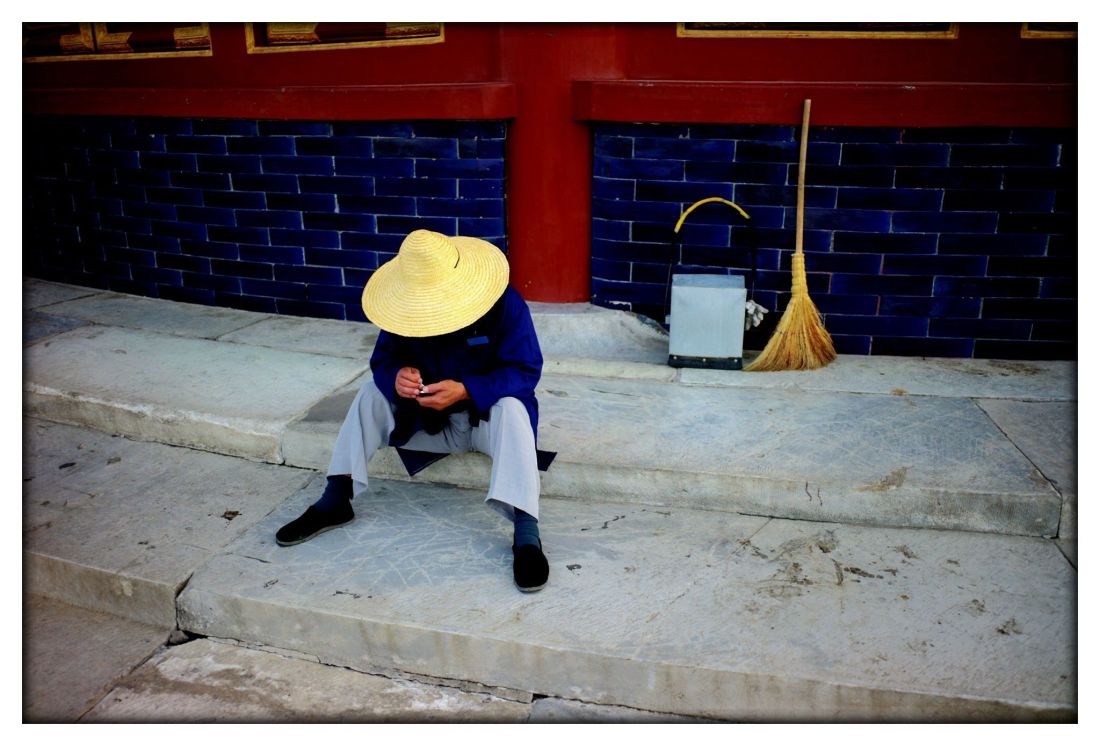 This Temple is what a temple should be! Grand but not rambling, photogenic, but not obnoxious, and more than anything not repetitive. On the way out, I stopped into one of the rooms and found the other half of the slab from Moses. It was impressive and of course all in Chinese. 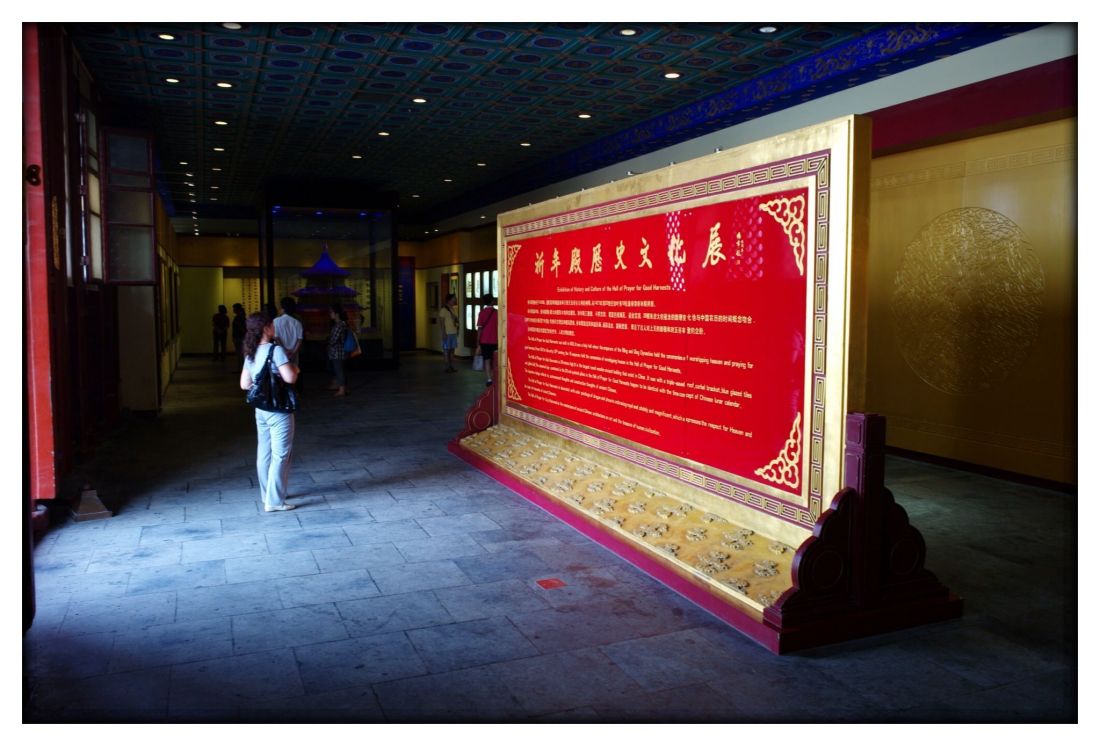 On the way out i spotted the tour groups coming in, and they were coming in droves. All bearing different flags to keep their group together, like a troop in the woods. This one tourist had an awesome shirt.

Why so few days? 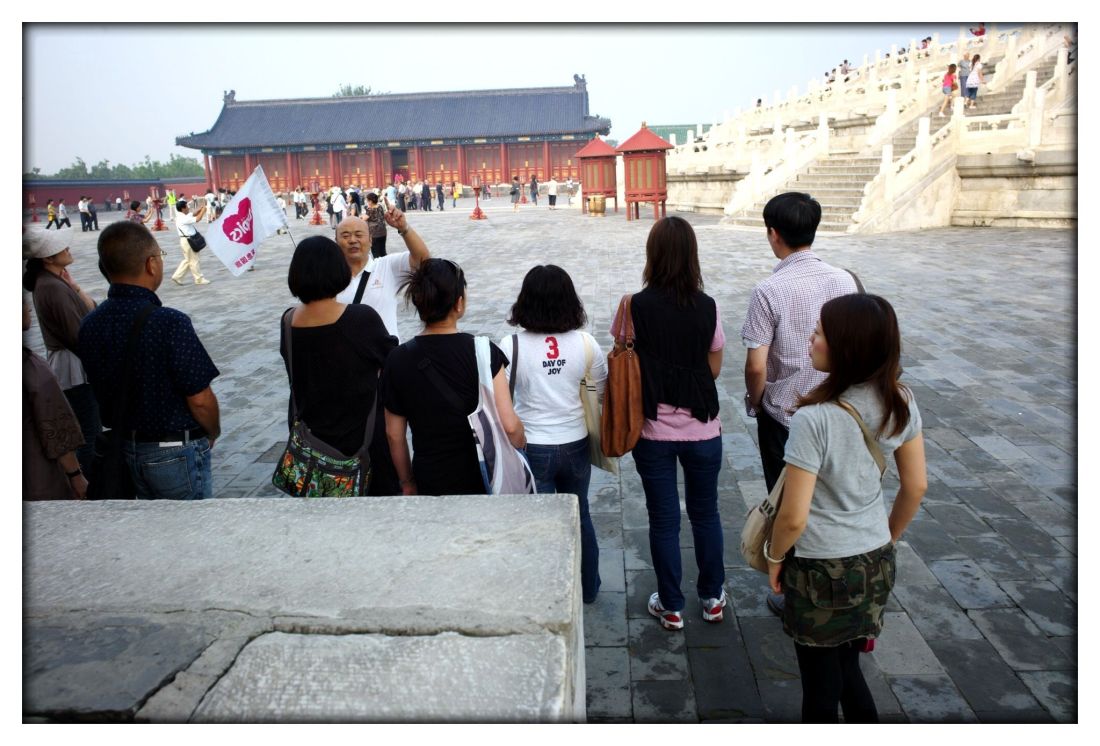 As i made my way out, i was super cautious about eye contact and inviting any more photo opps. As expected, I was getting hungry!! But before i could leave i had to find my way out of the massive park. Strolling the opposite direction that i took on the way in, I found a certifiable badass. 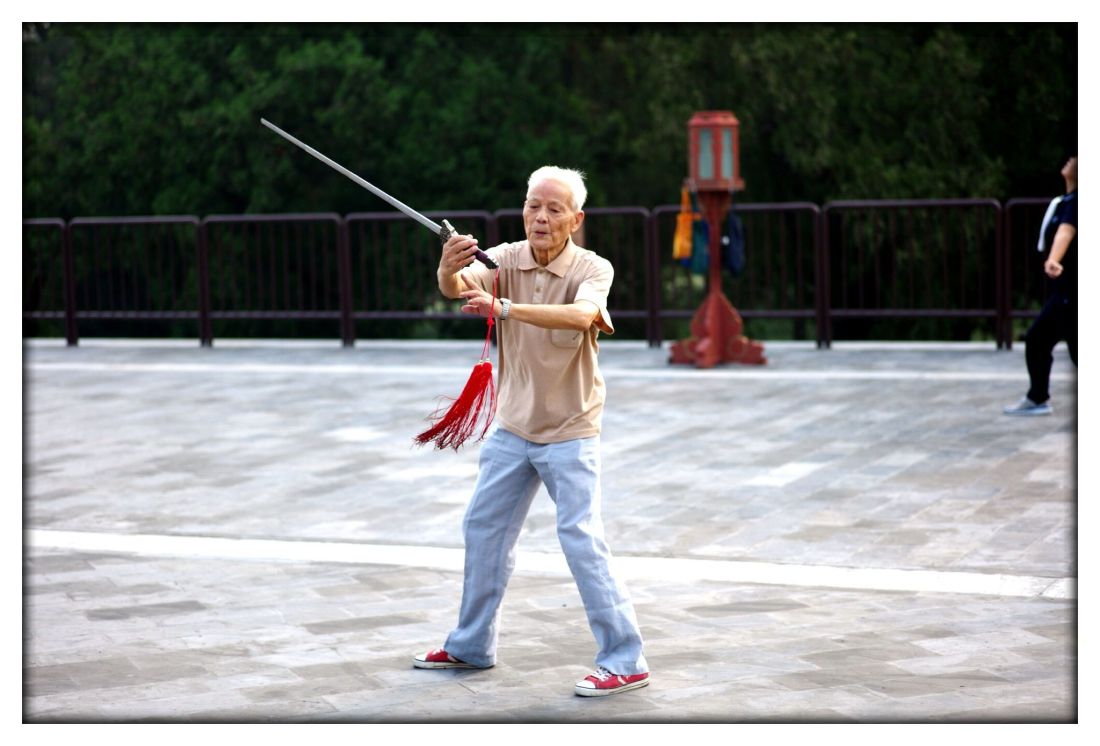 This guy was awesome. In a sword choreography group but he was always seemingly out front and leading. He knew i was there and gave me a slight smile out the side of his mouth. I appreciated it. Not only was he awesome with the sword but check out his outfit. His kicks are slick.

As I approached the gate, i was again pulled away by sound, and in particular the sound of a waltz. I made my way back to the source, and found a massive group ballroom class. Damn, is everything done in massive groups? But one couple caught my lens, and they loved the attention.

So you think you can dance 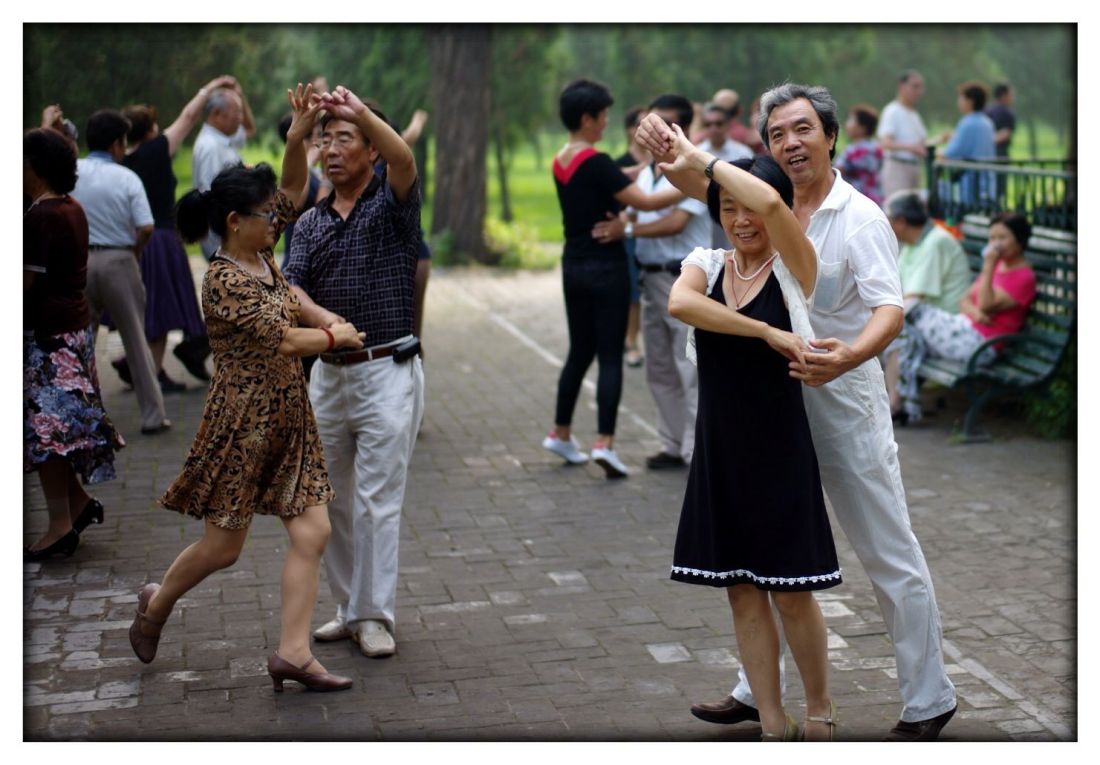 While the couples below weren’t as photogenic, i still want to give them some love. 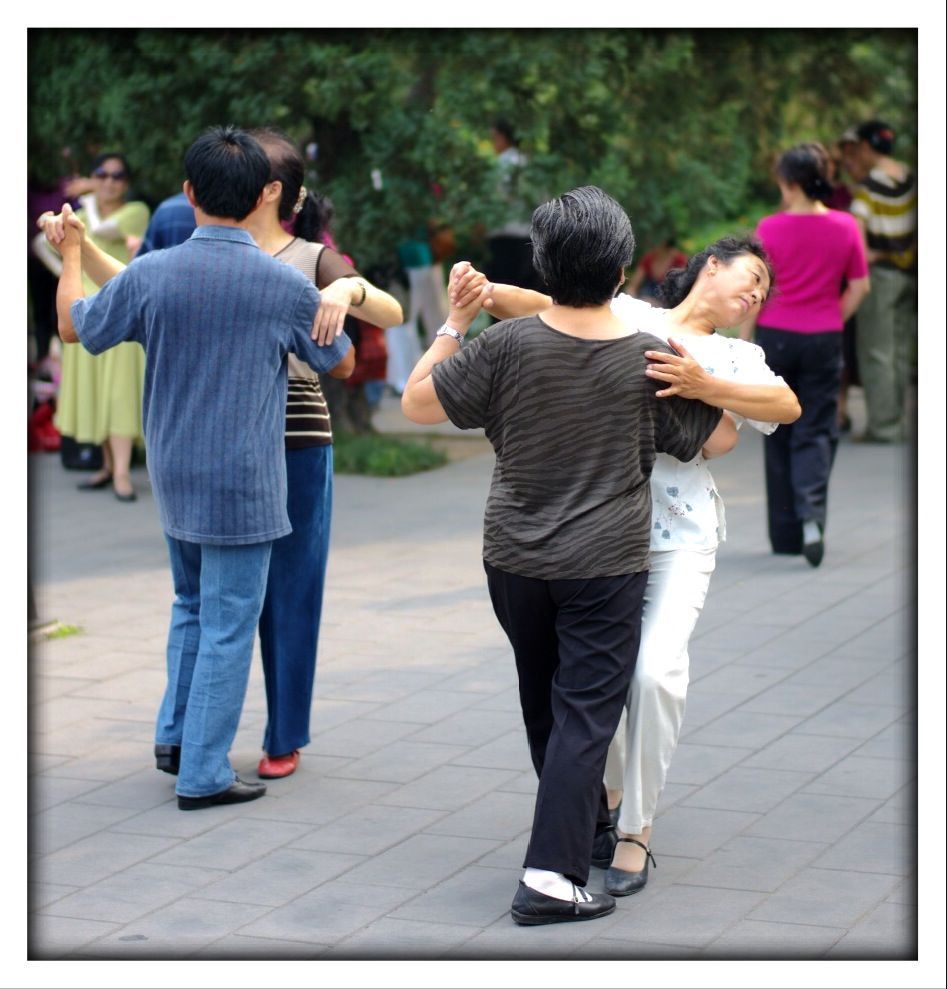 With those snaps, i was out of the park. From tai chi, to badminton, to rings, to dancing . This park was alive with energy and all of it coming from folks 60+ years old. Oh, and i saw an opera performance as well.

As i was trying to sort my transport back, i saw the mini tank. 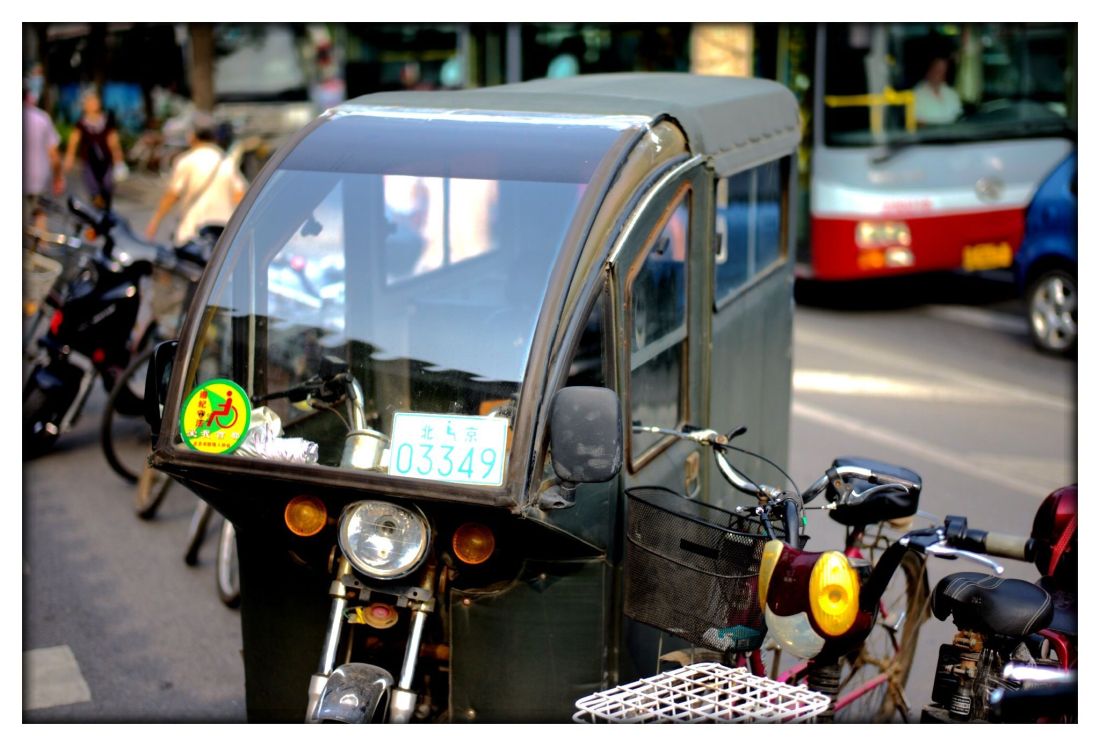 A mini tank in action 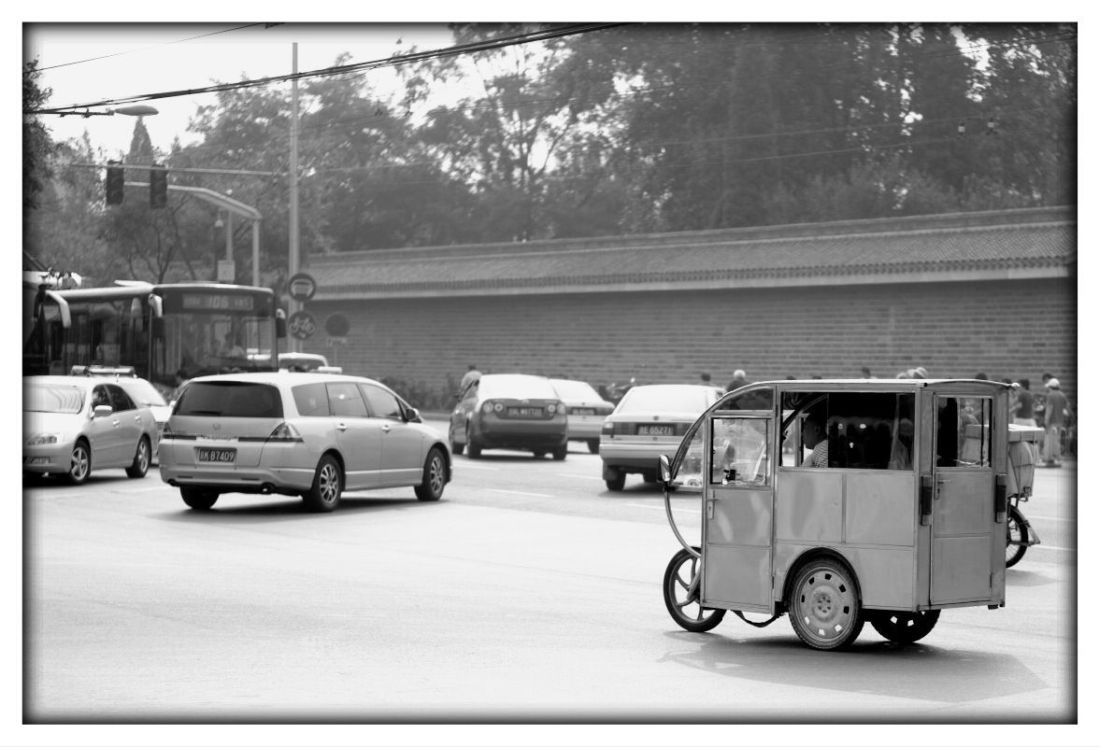 What exactly is that thing? I see people all over town in it but i can’t understand how it seems to be a good idea. All i can see is the metal box crushing it’s driver inside, unless it’s made of some super strong steel. But if it were, then the 15cc motor on it wouldn’t be able to move it.

While walking toward the cab area, i finally got to see what was behind one of the many walls that give the sense of manicured lawns and gated communities. 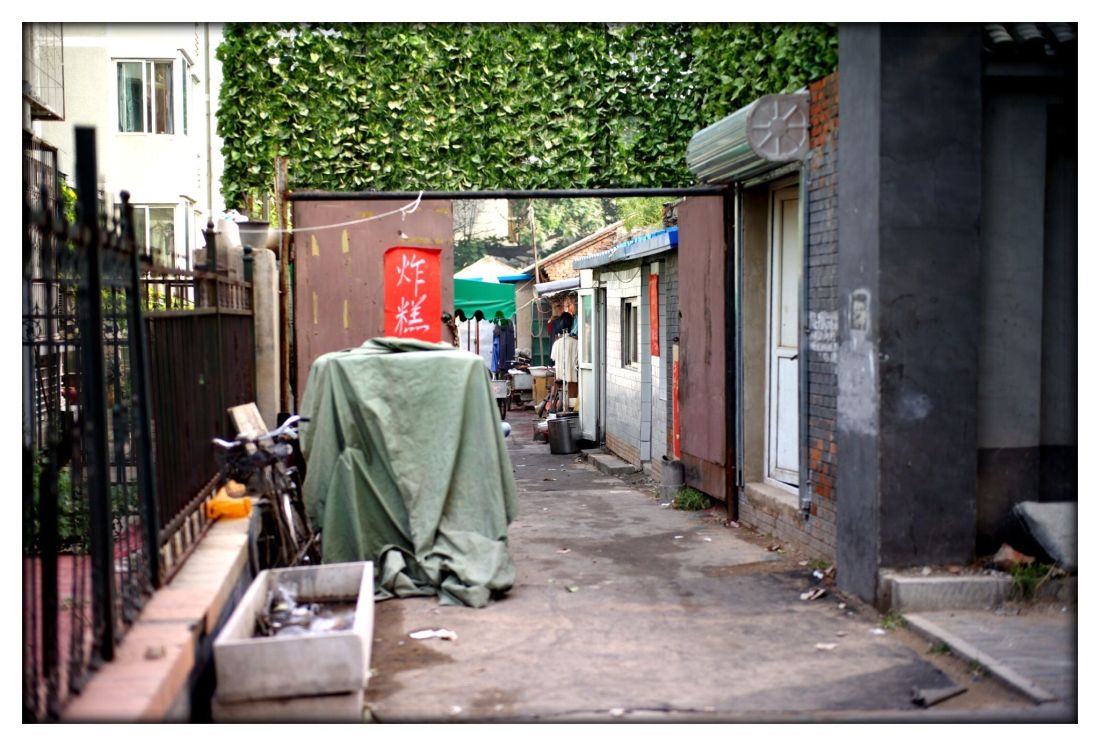 I am going to have to get back to that, but at this point i was hungry and wanted food. I found a cab, and finally the paranoid advice in the Lonely Planet paid off. He wanted me to pay a flat rate and take me to see a tailor for a suit. Ha ha, i know that game. Pulled out my geeky iphone and hit the button to say “please turn on the meter”. He burst out laughing, “ok ok my friend”. 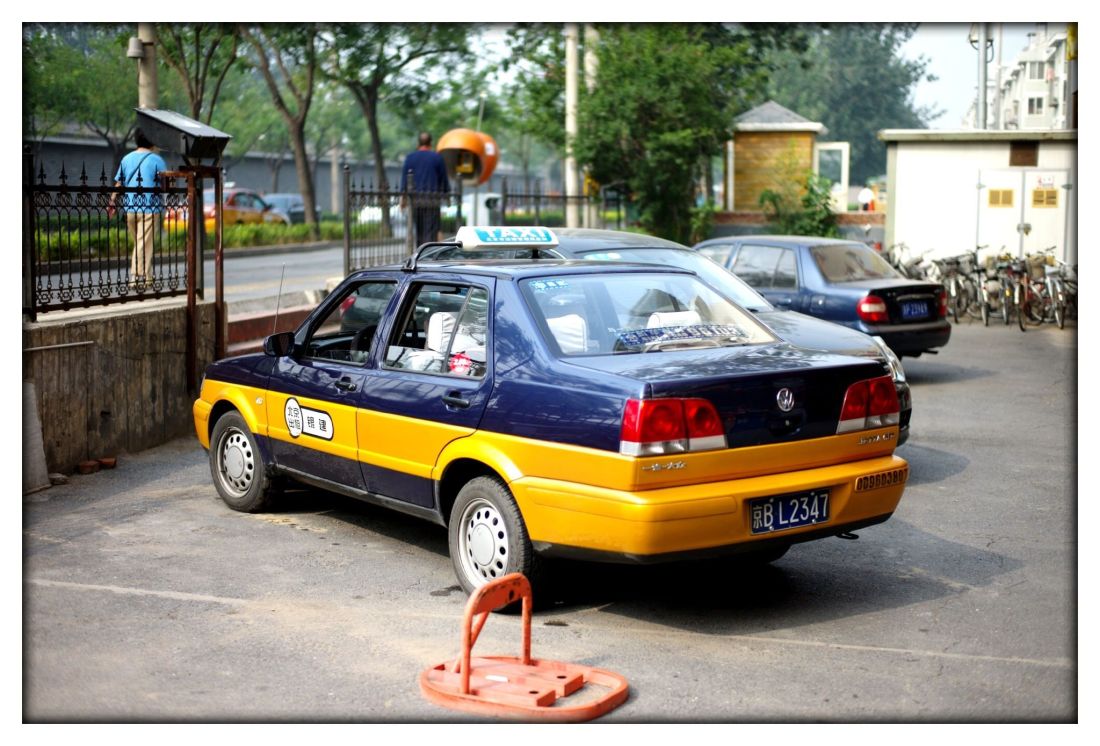 Lunch was an adventure in and of itself, but that’s enough for now. Need a nap.