Paranoia… that’s the word of the past few days on the road. This plan has been ambitious from the beginning. To buy, design, and build a vehicle in a couple of months for an epic journey, is asking for stress. And it has definitely come …

We set out Friday for Seattle, and we were late from the beginning. It took forever to pack the van and also get a quick alignment before hitting the road.  It was daunting to see the GPS projection of the number of hours ahead of us.

The first night we didn’t get a ton of miles down. But it was cool to finally see the new lights and systems working. That’s when it hit me that we’ve installed and done a ton of work, but we hadn’t really put many miles on the systems yet.

Lights were bright but will need to be aimed more accurately. I think I can get more throw out of them without blinding people.

Up early the next day, we hit the road. Having done this drive before in my 1980 Riviera, there was a night and day difference driving with Subaru power. We kept an easy 75 – 80MPH and hummed along., but man, the heat and no A/C was rough.

The first gremlin to rear its head was our flashing red coolant light. This is where having a hybridized car (half Subaru/ half VW) gets a little knarly. This light is on the temp gauge and is supposed to light up when either the coolant level is low or the engine temp is too high. This light started to come on over the past couple of weeks, despite the coolant level being full, and the engine temp being normal. So it’s a gremlin, but still worrying on a long road trip.  The paranoia officially started with that blinking light.

We tested our Delorme InReach extensively for tracking and reporting our position back to our family and friends, as a mini test of what it could be like using it in the bush in Africa.  The system worked flawlessly. It uses the Iridium satellite network to upload your position to a website that you can then share and track your location every 10 minutes. It’s also a 2-way device, so you can hit a button and send up a message as well. It’s a lot like the SPOT system, but with broader coverage (anywhere on the planet), and more robustly made. More on this in one of our gear reviews, but it worked flawlessly.

On Saturday night, we stopped in the middle of the night to get gas, and that’s when we noticed a huge plume of steam rising from the back of the van. UGH… did we blow the head gasket? Was the blinky red light telling me something?

Upon closer inspection we found that a coolant hose rested on the exhaust, and it burned a hole in the hose causing our leak. So now the field repair began! But there was a catch, in preparation for the work on the van, I removed all of my tools and supplies from the van and left them in the garage. Ugh.

It was 11PM at night and we had two gas stations open for supplies. In one of the stores we found some tape, a small pack of rubber hose, and some gloves. This was looking pretty good. The next store, turned out to be the mother find, as they had some emergency self-fusing tape! For those of you who don’t know, this stuff is a “tape” that you stretch and wrap onto itself and it seals and fuses together.

With the help of a mildly drunk driver, but good samaritan, we pushed the car over to the side of the parking lot, and we went to work. Crawling in the dirt, I couldn’t help but think about what this would be like on the side of a road in Egypt, and the need to be sure to bring things like self-fusing tape.

In about 45 minutes, we completed our patch, wrapped it with our tape and were ready to drive away. We cranked the van and there was no coolant leaking! Exciting! So we set out back on the road around midnight.

At this point, our paranoia is at an all time high; every two seconds, we were checking the mirrors for smoke (as if we would see it in the pitch blackness of night), and sniffing violently at the air for the sweet smell of coolant. After 15 miles, we decided to stop to see if were leaking coolant.  And unfortunately we were. Our patch and tape didn’t hold, and coolant was everywhere. Like a cut artery, we were bleeding out and bleeding out fast. In addition to the leak itself, the engine only has so much coolant and if it runs down too low, the engine cooks itself, and secondly we were on an access exit in the middle of nothing. Literally, this was the first exit since we left the town.  So its decision time, do we double back and call it a night and fix it in the morning/ get more supplies? Or do we pay for a tow back to the town, having to wait an hour for it, etc. We decided to double back and pray we didn’t bleed out before we got back to the town. It was a blow to the confidence, we were stoked to have “fixed” it and now it was back to the drawing board. Sleepy time.

The next day we decided to work on a more robust fix. First, we wanted to deal with the temperature issue and the hot exhaust melting the hose. We determined our first fix failed, because it was still too hot under there and the tape wrap burst like a blister.  So we decided to remove the exhaust, wrap it with an insulation to lower the external temp, then come up with another fix for the burnt hole in the hose.

We were lucky to have a local Oreilly Autoparts in the town where we were and we set-up shop in the back of the parking lot. The manager was amazing and showed us a ton of support. We bought a small garage of gear to get the fix done. Exhaust wrap, ramps, chocks, paper towels, water, torque wrench…. 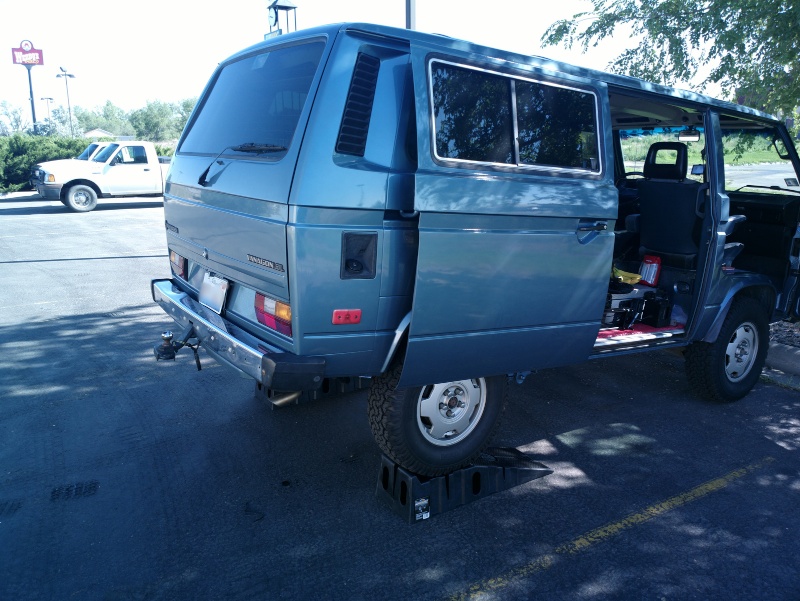 Luckily, we installed the exhaust, so we knew it well, and were able to take it apart pretty easily. We wrapped the exhaust with an insulating wrap that is meant to actually help performance, and exhaust flow. The process of wrapping it was pretty annoying. First, we had to soak the wrap in water to make it flexible and stretchy. Then it was time to wrap it, let it dry, and then paint it with a silicone paint to seal it.

This is the wrap in “raw” state drying in the sun

That took a few hours to do, but came out pretty darn cool.  Next up was the fix for the hose. We decided that the best plan of attack was to redo the patch with a bigger piece of rubber, seal the patch at the perimeter with epoxy and then wrap with the self-fusing tape. When reading the instructions for the tape a second time, we saw that we were supposed to wrap it with 3-5 layers of the tape! We had previously only done 1 layer… DOH! Another couple hours or so of futzing to clean, prep, and reinstall the patch and then the wrap. Then we could reinstall the exhaust and start putting everything back together. We even made a little “suspension” from zip ties to hold the coolant line away from the exhaust.

You can see in the picture here the white tape on the hose and the newly wrapped exhaust! She was looking good at this point

Now it was time to test the set-up. We did the same 15-mile stop and NO leaks! The exhaust was smoking like crazy, but that was to be expected as the wrap “cooked”.

So the next 1400 miles were pure paranoia. Blinky coolant like going off (refilled with more coolant but still on), stopping every 30 – 40 miles to look for leaks (none!), pouring water on the engine to see if it boils hinting at and overheating situation and a growing sense of angst about why the coolant light was blinking.  Along the way we met some awesome people. We diagnosed that we had air in our coolant system, met a fellow bus lover, and bled the system in a Wal-Mart parking lot.  Crossing over the mountains in Washington state, we saw another VW suffering from a coolant leak and steam pouring out; we stopped to help and gave a ton of advice as we had just tackled the challenge.

And finally, on Monday we made it to Seattle, and left the van in the care of the awesome team at Peace Vans. More on them soon! They are going to transform our baby over the next 2 weeks!