We have been making serious progress over the past few days. We have tried to be disciplined and spend most non-working hours tackling the van. Last night we worked until 2AM, and I can finally say we have completed the sound deadening and insulation job on the van.

We have stripped, cleaned, applied dynamat, sprayed with sound deadener, and finally glued and taped thermal insulation to all of the major panels. It felt good to stand back and look at the work. 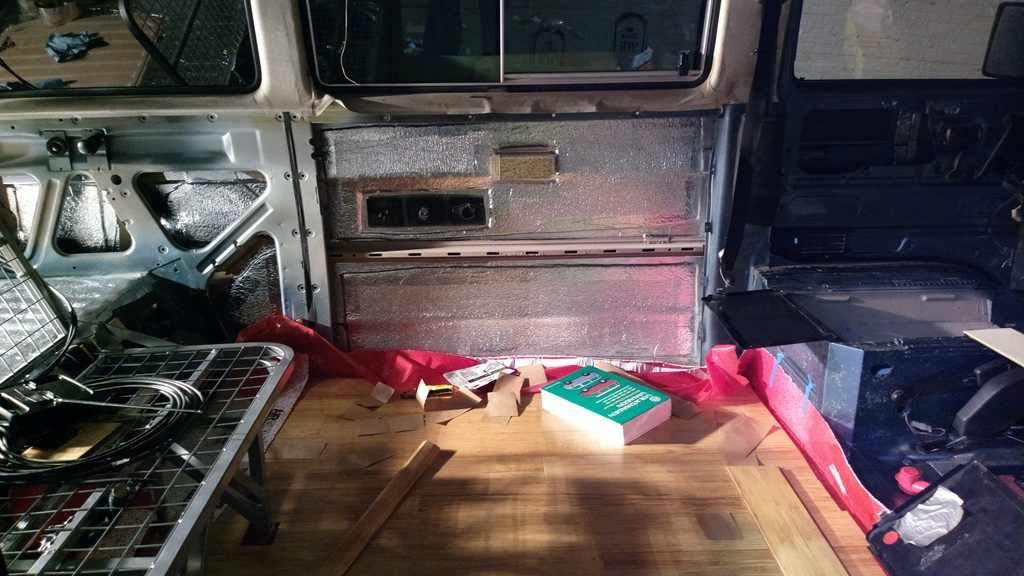 In addition we went to work installing the onboard compressed air system we designed. This is a pretty straight forward project, with the hardest part being mounting the tanks to the chassis of the van underneath. We could have drilled a hole and bolted the tanks down with a nut and washer, with the floors being out, we had access to both sides of the van. As we researched we found that air tanks only last a few years before they rust from the inside out due to condensation from the compressed air. If we went the bolt and nut route, we would be SOL when it was time to remove/ replace the tank because we would need to completely remove the floor to get to the nut to remove the bolt. So needless to say, that option was out. Another option would be to use a sheet metal screw and just screw into the metal of the van. This would work but we would only get so much holding strength and when we ultimately remove and reinstall the tank, the screws wouldn’t hold very well. So we decided to do what any budding mechanic would do, we bought some new toys, I mean tools. We went with riv nuts, which are basically threaded sleeves that can be placed into a drilled hole and then compressed into a “nut” that you can easily bolt into and out of. Pretty cool.

The beast of the install was actually screwing the bolts into the riv nuts. With the tight space between the tank and the frame, and being on our backs under the van, it was a rough go to get the bolts started.

There goes the knuckles…

As we were wrapping in the early morning hours, I couldn’t help but notice the carnage from all of the cutting, glueing, and pasting. It was an oddly proud moment. We are getting there…