It’s been over a week since the last post, and I am tired. This past month has been a daily run on the van. Balancing our full time work, with the van every night, running off of 4 hours of sleep a day, gets old after 31 days. My respect is growing daily for the men and women who restore cars from rusty heaps to full bodied awesomeness. I am not sure I would do another one of these. Ok, my rant and whining is over, here is where we are.

The past week has been focused on all of the little items. We have completely redone the interior, including new upholstery for the seats, new door panels all around covered in a durable wipe down material, and new carpet and mats for upfront. We worked with the team at Sewfine to design the new panels, and they make them by hand. I have to give a shout out to Carol a Sewfine, who truly believes in catkins care of her customers. It’s odd because I have gotten so used to just clicking buttons and placing orders, and it was refreshing to talk to a real human being, who knew her stuff, and actually taught us about our own van. Pretty amazing. It was exciting to put the panels back and start to see the van look “nice” again.

We chickened out on the install of the seat covers. We were behind on the build and time was running out, and to be honest it looked like an absolute headache. Hog rings, snap pliers, heating up materials, plastic sandwiches, no thanks. We are lucky to be down the street from the guys at Orlando’s Auto Glass and Body. They are a premiere shop that specializes in upholstery and custom car interiors. Typically when you hear the word “specialize”, you think expensive, or at least I do. Well, the guys heard about our project, and gave us some help! They recovered the seats, installed the front carpet, and then helped us deal with the nasty white vinyl wrapped around our interior windows. This stuff was gross. We were perplexed at what to do about it, it wrapped around and under the windows, requiring us to take the windows out (again), if we were to remove or replace it. Orlando’s to the rescue. They replaced it with a dark gray vinyl, added an awesome stitching to the seams to give it a finished look and handle the tension, and put the windows back in. Amazing, we are crazy happy with it.

Now on the work we did. we are now to the finishing details, hinges for the bed platform, mounting battery mats under the starting battery, running the air hose for the compressor, installing new speakers, putting in safes in locations around the van, and the list goes on. We hit a couple of roadblocks though that we are still dealing with. First up was the battery box. We went right away to building the box, using some leftover undercoating and carpet.

We devised a pretty cool hatch that opens on top and has shelving for the batteries. We have a pretty robust lithium ion battery solution for the van. They look a bit delicate with the boards below, but our box protects it all very nicely.

When we measured for everything we measured for the cells to stand up vertically, giving up a tall and somewhat slender package. The problem is that our manufacturer recommends that the batteries be laid flat. Uh oh, that’s a problem. The batteries were to go in the rear cabinet to the side of the bed platform. So we remade our battery box for them to lay flat, and were happy! Standing tall you would still able to remove the engine bay cover and access the engine. With them laid flat, the batteries are too wide, and they cover the engine bay cover. Ugh. Not going to work there. The batteries are just too heavy and interconnected to the electrical system, to realistically move them every time we went to check the oil. Ugh. So now it’s an engineering question, where to fit the batteries. We moved our battery box all around the van trying to find a home.

Behind the front seat?

In the end we have decided to build a center console between the front seats and house the batteries there, and also provide some additional storage. The question is to make it from wood or metal… Hmmm… This is a big problem to solve because we can’t connect our electrical system without it. This also has big implications for our cable runs and such. Frustrating to say the least, but solvable.

The final mega project now is to get the cabinet system fitted and mounted. We have temp placed the main cabinet in before and it’s fit fine, but the challenge is the rear cabinet. 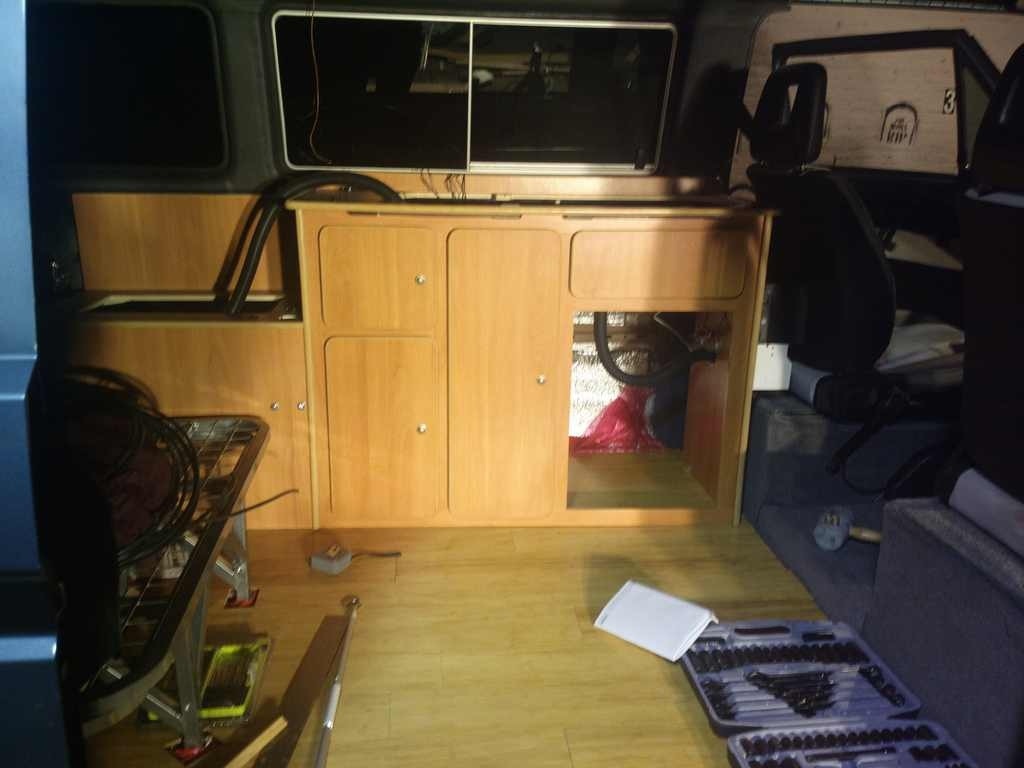 The rear cabinet simply wouldn’t fit. The AC hoses interfered with the top of the cabinet.

So we had to dismantle the rear cabinet, shift the door on the cabinet down (it was too high to open with the AC in place) and cut the drain hose for the overhead rear AC (which we will later rejoin), but after a few hours of wriggling, it finally fit in place. These little projects end up taking so much time. The rear side of the cabinet still needs to be remounted and customized to fit, and then it all needs to be removed so we can cut in the electrical panel. 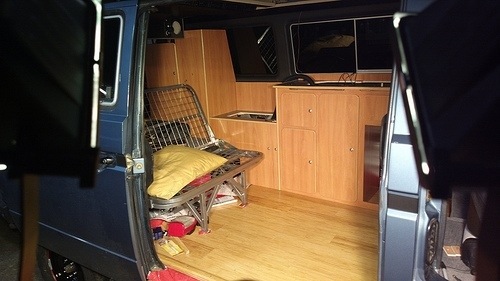 Since the van is now mobile, I took it to have its steel wheels installed and a tire pressure monitoring system put in. The wheels are South African VW 15″ steel wheels, we really wanted 16″ wheels, but we couldn’t source any on our timeline. But now with the timeline slowing down a bit, I will feel a pinch of potential regret if 16″ steels suddenly pop up.

We also tackled the mechanical work. We installed our new drive shaft using the GoWesty laser tool. It was pretty easy to do, but still work to get it all lined up in front. We took it for a spin and no vibrations!! We moved on to install our awning on the side of the van. This is our shade wherever we may go. It’s 10 feet long, so it took a couple of us to get into position. The kit includes 2 vanagon specific brackets from GoWesty, but the manufacturer recommends 3, so I ordered another set of 2 (can’t order just one), and I have to say, that I am glad I did. The awning is huge and I can only imagine that on rough roads the awning could flex in the middle, warping the case (this has reportedly happened to some). The installation was a bit nerve wrecking because you have to drill into the van body and install a rivnut to mount the bracket into. In the process of doing that, I dropped the bracket and it hit the side of the van, chipping the paint 😦 ugh. I am fighting the urge to repair it, because post Africa, there is going to need to be a new paint job anyway more than likely.

The one annoying task we had to tackle, was recycling and trash take out. We have been amassing a huge amount of boxes and trash from the work. We wanted to recycle and do it right, so we used our trusty ZipCar membership and rented a cargo van. Yes, I guess I could have taken everything out of the syncro and loaded it down, but that was more work than swiping in on the cargo van. We sorted all of our recycling and loaded up!

With the wheels fitted, sliders mounted up, and awning hung, the van really has transformed. It’s time for a new name…