After 7 weeks of anticipation since we have shipped ‘Bo,’ he has finally arrived in the UK.  We met ‘Bo’ at the Chatham Docks, which is 50 miles outside of London.   When we arrived we were lost.   Nothing looked like a place for shipped cars.  We end up asking a guy at the dock, who said that company wasn’t importing anymore & had moved a month ago but pointed us in the direction of where the warehouse was. We looked at one another a little frightened & not knowing what to expect was coming.  Luckily we rolled up to a warehouse that was only a corner being used but there he was.  It was a really good feeling to finally meet back up again & begin the project.

Of course you know nothing comes easy with this van. Off the container we had a dead battery & a bad alternator.  Been there done that before…. 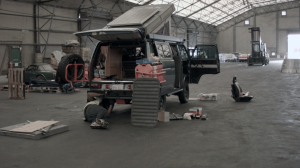 We have now set off from port to start the project.   We have a week of preparations to settle in on living in Europe before we start filming our first project.   Super excited to be here & helping so many organizations in a short period of time.