China Day 6: Out of Beijing

Today has been spent planning the rest of the days here. After being burned by the train and stuck in Beijing for another day we wanted to ensure we got out today. So over breakfast we spent the morning planning. We met a fun and helpful couple over breakfast. The guy was American and spotted the iPad and struck up conversation. He was nice and stereotypically American gregarious and we loved it. He is from Houston but does a lot of business here in China as well as being engaged to a beautiful chinese woman. She also joined us for breakfast. The two gave us a ton of tips on what to do with the balance of our time. Me and the guy shared a laugh about the forbidden city “up and down, up and down it’s all the same stuff. Nothing to see.” with travel tips in hand we did some serious planning and booking. I don’t want to spoil the fun, but there are numerous flights and some locales last only hours. Should be fun.

With the morning burned, and a flight set for tonight, we locked in on food! Trip advisor, lonely planet, and our front desk all recommended the same restaurant for Peking Roast Duck. With the address in hand, off we went.

It was a hard cab ride. Traffic was literally stand still and I started to appreciate the 3 month long traffic jam that I read about heading out of the city. To make matters worst our driver had the ac on the lowest setting so it was an exercise in futility to try and explain to him to turn up the air.

But once we arrived at the restaurant it was well worth it. The staff immediately sat us and presented us with 5 menus. A very impressive sight. We settled in on a duck & all the trimmings, sauteed shrimp, hot sour soup, sparkling water, and 2 beers.

Up first was the hot & sour soup.

It was served very delicately in this massive black bowl that didn’t leave that much room for the soup. But the soup itself was amazing. I knew this was the start of a great meal. Unlike most hot and sour soup in the US, there was no meat or overt chunks of vegetables. This was much more refined. Judging by the consistency, those elements were present but part of the base. Delicious.

Next up were the succulent sauteed shrimp and the duck. First the shrimp. These were delicious! Very lightly sauteed with a soft sweet coating on them. These were a classic sweet and sour taste but it was very light so you could taste the fresh shrimp beneath and the presentation was great. Next up was the duck. They bring out and present to you your whole duck. Once you nod acceptance the carver goes to work delicately carving the skin and meat off the duck. And serving it on two plates, each with half of the duck and then a third plate with the duck neck and head 🙂

1 half duck & shrimp (we had eaten the other half) 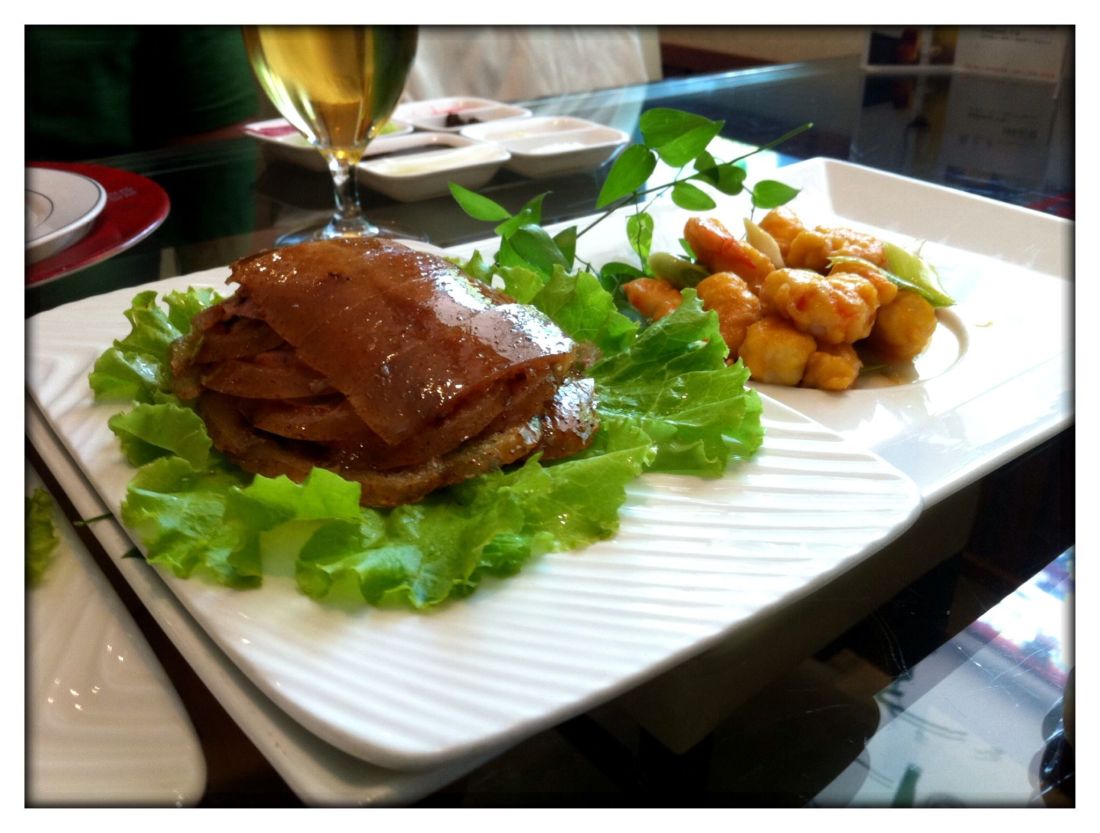 The skin is presented on top of the meat and it appears to be a whole piece but instead it’s expertly cut into slices! Now the skin was amazing. I was expecting crunchy but instead it just dissolved on the tongue. No I am being serious. Like a culinary tab of acid, it was euphoric! The meat itself was succulent and well flavored but the skin was definitely the star.

In addition to the duck, they give you seasonings and pancake wrappers to roll your own baby duck burrito. They also gave us another soup which was like a miso and solid. But another surprise was the grapes that came out in the end on a bed of ice!

These grapes were “juice” grapes, and thusly plump with a juicy fleshy core and seeds to discard. They were a perfect way to finish the meal.

Post lunch it was back to the hotel to get the heck out of Beijing and on to the next stop. Xi’an, China! You can read the escapades in the other posts…